With increasing cases of herbicide resistance, machines designed to destroy weed seeds at harvest could be a valuable tool. But like any technology that is not yet widely adopted, there are also some lessons to be learned and challenges to overcome, as researchers with Agriculture and Agri-Food Canada confirmed last year.

2017 marked the first year of in-field testing for AAFC and its Harrington Seed Destructor, imported from Australia. The tow-behind unit contains a cage mill, which crushes the chaff coming out the back of the combine.

As Lacombe-based AAFC research scientist Breanne Tidemann explains in this Canola School episode, they conducted harvest trials in 20 producer fields in Alberta last year, and will be going back to those exact same spots in 2018 and 2019 to measure the impact on weed populations. 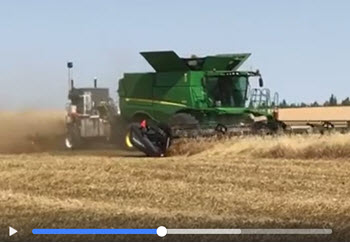 click to watch a video of the Harrington Weed Destructor in action in 2017 near Lacombe, Alberta.

“We don’t have any data yet in terms of the weed population effects, but we did learn a lot of lessons,” she says.

One of those lessons was the importance of high air velocity to transfer chaff into the Harrington machine.

“You have to get chaff off the sieves and up and into the seed destructor. If you don’t have velocity, you end up with a plug and burnt belts,” says Tidemann, noting it was also a challenge to get green or tough plant material to flow into the machine.

The tow-behind unit is generally not well-suited for the topography of most Western Canadian fields, she says.

“We’re too hilly, and just not long enough and flat enough without having to turn, and you run into issues there,” says Tidemann.

For those reasons, the Integrated Harrington Seed Destructor that’s recently been commercialized in Australia and a competitor called the Seed Terminator would probably be a better fit, she says. Both of these units are mounted onto the rear of the combine.

The field testing was also a reminder that weed seed destruction at harvest won’t work for all weeds, as weed seeds have to still be on the plant at harvest, and high enough in the canopy to get them into the combine.

That means it likely won’t be effective against wild oats, which starts dropping its seed earlier in the season, and weeds in the tumbleweed category, which tend to not enter the combine feederhouse. At the same time, there are weeds of concern where it would be a good fit, such as cleavers and volunteer canola, says Tidemann.

With further testing over the next two years, she says they hope to have a good understanding of what to expect for issues and results with these machines in a Canadian context.

“We’re hoping we’ll be able to provide answers to producers for when they get in a situation where their herbicides aren’t working anymore. We’re trying to find some of those answers before they necessarily need them,” says Tidemann.

Fumigation in the fight against clubroot