Canola seed companies are releasing more varieties with claims they have reduced susceptibility to sclerotinia, but how do they determine those ratings? Coming off a season with high sclerotinia pressure, what does it mean if a variety is labelled as ‘partially resistant’?

In 2011, the Western Canadian Canola/Rapeseed Recommending Committee started searching for a test that could be used to compare sclerotinia resistance in co-op trials. After five years of testing across the prairies, the committee adopted a standardized protocol known as the ‘sclerotinia stem test‘ last winter.

“Sclerotinia is a notoriously difficult disease to screen and test for. In the past we relied heavily on field trials, and of course you need the right environmental conditions to spread the disease and see the infection. This year is pretty harsh and a lot of fields have had that, but it’s hit and miss,” explains Sakaria Liban, pathologist with DL Seeds.

As shown in this Canola School video, the protocol adopted by the industry group sees each plant artificially infected with the disease. A mycelium plug is attached to each stem using parafilm when the plants are at full flower. To rate tolerance, they measure stem rigidity and the length of the lesion 21 days after inoculation. 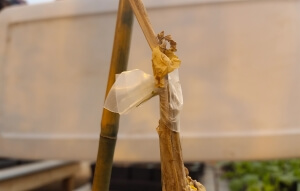 A susceptible canola plant that was inoculated at the same time as the green plants in the above photo.

“More resistant lines will essentially be able to halt the infection process, where something that’s more susceptible will spread all along the stem and into the pith, inhibiting the potential of the plant,” explains Liban (see photos).

To be deemed ‘partially resistant,’ a new line must show significantly better resistance than the susceptible check variety — Pioneer’s 45H29.

Unlike blackleg resistance, tolerance to sclerotinia stem rot is dependent on multiple genes working together in an additive effect, which makes it’s harder to quickly transfer a high level of resistance, he notes.

“We are seeing gains of about 25 to 30 percent improvement over a susceptible line. As new varieties come onto the market, that should improve overall,” he says. “A lot of the recent research shows there is material that can do a lot better than what we have available in the market today, and over time we expect to bring products that improve on that resistance as well.”

According to the Canola Council of Canada, 1 percent sclerotinia infection equals a 0.5 percent reduction in yield, so Liban says growers should already be seeing benefits from using varieties with improved tolerance, especially when conditions are conducive for the disease as they were in 2016.