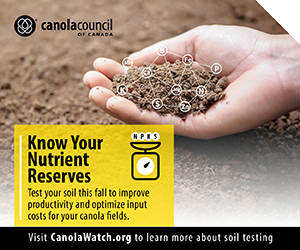 Genetic Diversity and the Fight to Protect Clubroot Resistance

Visible clubroot symptoms were first identified in a canola field in Alberta in 2003. It has since spread through much of the province, and by the end of 2014, it was present in 30 municipalities and into neighbouring provinces. It was also that year, that a pathotype of the disease observed the year earlier was confirmed to have overcome variety resistance. 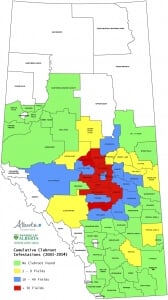 Cumulative Clubroot Infestations in Alberta, via Alberta Agriculture and Forestry

“In 2013, there was a case where a clubroot-resistant cultivar was showing large areas that had large gulls on the roots, and it was found that there was a new pathotype that…essentially emerged in that field,” Michael Harding, research scientist with Alberta Agriculture and Forestry told RealAgriculture.

Since then, 27 suspect fields have been identified, and 16 were confirmed to have pathotypes that overcame clubroot resistance.

“Of those sixteen, nine of them were unique,” said Harding. “There’s a significant genetic diversity and potential for these variants that exist at low levels in the population, to emerge when there’s a lot of selection pressure.”

And, it’s not like only a few farmers in a select region will need to worry about these pathotypes.

“These new fields aren’t clustered around the original location of resistance breakdown. They are hundreds of kilometres apart and throughout the clubroot-infested areas of the province,” explained Dan Orchard, agronomy specialist and clubroot lead with the Canola Council of Canada in a release in May. “We need to continue to focus on both minimizing the spread of these new pathotypes and the buildup of resting spores in all fields.”

Resistance stewardship (like alternating sources of resistance), says Harding, is a big part of the management of clubroot going forward.

“It would be a little bit foolish to just throw caution to the wind.”