Representatives of Alberta Barley, Alberta Canola, Alberta Pulse and Alberta Wheat (nicknamed Team Alberta), along with the Grain Growers of Canada traveled to Ottawa on April 11-14 to bring the farmer’s voice to the federal government on four key areas: transportation, trade, research, and sustainability. I was fortunate to be one of the farmers who participated in this outreach because I learned government policy is made by those who are present. Farmers have very little clout individually to influence government policy, but collectively we can make a difference.

As one farmer to another, here’s my take on why it is so important for our crop commissions to do this trip, and why we emphasized these four key areas. 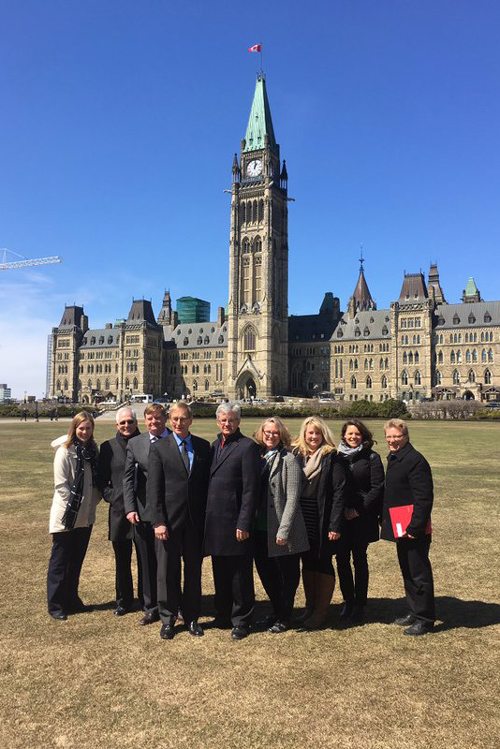 Why is Team Alberta making this trip to Ottawa?

With the recent change to a Liberal federal government it is necessary for us to inform the government about our industry and our major concerns. Since primary production is at the front of the line in the supply chain and the back of the line as price takers it is very important for farmers to be there to tell our story. Farmers have a credible voice with MP’s because we have considerable skin in the game.

Additionally, while farmers contribute greatly to Canada’s economy, the reality is we represent a very small percentage of the population and the doors are literally swinging on the hill with meetings. From a sheer volume of messages with all of the other groups lobbying and messages that are in contradiction to ours, we need to be there to set the record straight.

Why the emphasis on Transportation, Trade, Research, and Sustainability?

With the four commissions working together the focus was on key areas that we all had in common.

Transportation:
Apart from the weather, transportation is in my mind the most prominent variable that I cannot control and has the biggest effect on my bottom line. We export the vast majority of our crops,  so we are a captive audience to the railways for the movement of our commodities to port – there is no other cost effective way. Timely and efficient rail service is a prerequisite for us to capture the highest value for our crop commodities. Farmers are very good at production, but there is little value in ramping up production to fill expanding markets if we can’t move our products out of the country in a timely, consistent and efficient manner – let alone providing us with accurate and robust price discovery. Poor rail service in the past has damaged our reputation as a reliable supplier.

We are not happy with the CTA Review report and the government needs to deal with the railways market power. The only thing worse than government run monopolies is privately run monopolies. We need 1,000 km inter switching! When Bill C-30 sunsets on July 31st inter switching limits that were just starting to give us better competition with rates and service at 160 km will return to 30 km. We need adequate and suitable rail service that is demand driven (vessels waiting in ports) as opposed to supply driven (railcar allocation). We need reciprocal penalties placed on railways for inadequate rail service – currently railways cannot be penalized for poor service. For example, the train is coming so guys are hauling to the elevator on Good Friday and then the train doesn’t show up until the Monday. Who ends up paying the extra cost of working on a stat holiday? The farmers.

Trade:
Farmers need an open trade environment to ramp up production and remain competitive to other food producing countries. The government needs to ratify the Trans Pacific Partnership (TPP) agreement and the Canada-EU Comprehensive Economic Trade Agreement (CETA) in order to maintain existing exports, take advantage of new demand, and deal with non-tariff barriers. The Asia-Pacific countries in the TPP represent 800 million consumers and $21 trillion in economic activity, and the EU countries in CETA represent 500 million consumers and $17 trillion to the economy. We cannot afford our competitors gaining preferential access before us again; Canada is still trying to recover from the losses due to the delay in the South Korea agreement.

Research:
The commissions advocate for government policies to be based on sound science, so it is critical for ag research to be credible, peer reviewed, repeatable, and evidence based. Funding research is the single largest line item in the budgets of all the crop commissions. Coming to the table with producer dollars is essential to leverage significant federal and provincial dollars that supports the Federal crop research clusters and agri-science funding. These successful partnerships are needed in the next round of federal research funding that will lead to wide spread adoption of technology and perpetually drives innovation. A vibrant research community with high quality people fosters the innovation, efficiencies and productivity in agriculture. This is why it’s so important to have a stable, critical mass of government human resource capacity to meet the objectives of innovation by research. This also applies to the state of research infrastructure – further investment is needed to stabilize our public research capacity. 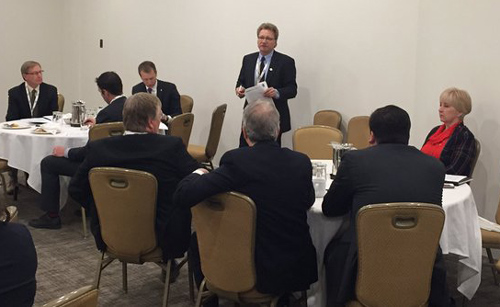 Sustainability:
It was interesting to note that the Federal Ministry of Environment has been renamed the Ministry of Environment and Climate Change. The emphasis on climate change and a national carbon tax is a concern for me and others on Team Alberta. Alberta farmers are some of the most environmentally sustainable in the world. For over two decades farmers have practiced conservation tillage, which has sequestered millions of tonnes of carbon in our soils, and we’ve invested in other beneficial management practices in the absence of regulations. In our meetings we stressed that climate change policies must consider the impact to farms’ viability and Canada’s competitiveness. Farmers must be exempted from any proposed carbon tax because we are price takers in the global market and we cannot pass along any upstream costs.

Having gone through the experience of a trip to the hill to inform and educate the MPs and their staff on our key areas of concern in the agriculture industry, I honestly believe we made a difference.  It is extremely gratifying to have the collaborative approach of Team Alberta to collectively come together to deliver a needed message to proactively help move our industry forward for the benefit of all farmers in Alberta.

Thank you for this opportunity to represent canola growers.