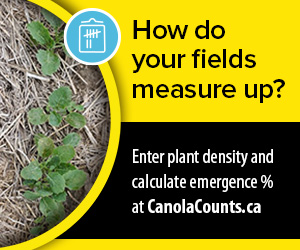 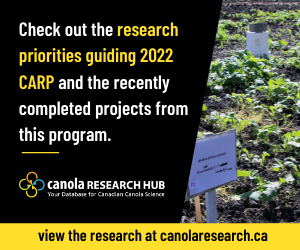 One of the top activities undertaken by Alberta Canola is funding research that helps growers succeed in growing canola. In collaboration with other crop and livestock groups, provincial and federal funding agencies, grower dollars are invested in the research of integrated agronomy, germplasm development, investigations into the impacts of canola oil and meal human and livestock nutrition, integrated pest management, disease and pest control and management.

The authors of this article have either been recipients of Alberta Canola research funds or participated on the Alberta Canola Research Advisory committee, aiding the Directors in reviewing proposals and understanding the nuts and bolts of the research being proposed. Regardless if it’s a small seeding rate demonstration, a human nutrition trial, or genetic work to find resistance to clubroot, being able to outline the backbone of the scientific enquiry being proposed, the treatments, is a fundamentally important when deciding to invest in work that will advance the pool of knowledge that allows farmers to succeed.

The Importance of a Treatment List: Diary from members of Crop Commission Research Committees

Crop Producer Research Committees are diverse in their make-up containing: producers, commission staff, extension experts, possibly crop consultants and often some scientific experts. For those who evaluate research applications requesting producer money, the applicant needs to show value by considering the topic area, the benefits to producers and the cost of conducting the research.

Evaluating research applications is more difficult where there is a lack of experimental detail; which does not allow the reader to understand what treatments will be compared, if the experiment is aligned with the objectives or how they are going to solve an identified problem. Generally, if the methodology description of the proposal does not allow the reader to repeat the experiment, it is lacking sufficient detail. This is usually the experimental design, the treatment list, and possibly the statistical analysis. Our role as scientific experts on producer research committees, is to ensure that when a research committee has narrowed down its priorities from the applications received that these applications will:

Without understanding the treatment list and the associated experimental design this task is more onerous.

A treatment list helps the reader define what is being studied. For example, ‘I will compare five rates of nitrogen (N)’ is much less informative than ‘Five rates of N at 0, 25, 50, 75 and 100 kg actual N ha will be compared’. Sometimes funding proposal methodologies are written as ‘Best formulations will be applied to plants’ which leads the reader to wonder: How many and what are they?

A treatment list helps the reader determine the effort required to do the work and compare it to the requested budget. If the application describes the data collection very well and indicates a series of complex and simple measurements to be determined it is imperative to know if there are two treatments, five treatments or 10 treatments.

A treatment list also helps define the scope of work and the effort required at one site and helps to determine the amount of work required when the experiment is conducted over multiple sites. In some cases, it is not clear how many samples will be evaluated – ‘several samples will be used to isolate bacterial strains’ but the number of samples targeted is unknown. It could be 5 or it could be 100. This has implications for the budget requested.

In some cases, funding proposals describe the range and number of treatments. For example, five serial dilutions that will be up to 10-4 or 10-5 and 100 μl. The reader has to imagine what the actual treatments will be. Also, terms like ‘at least 5 commercial cultivars’ and ‘at least 5 isolates’ are not descriptive and makes the reader assume that the number is 5 commercial cultivars x 5 isolates. What is it really going to be?

Specifying varieties/genotypes to be evaluated by name is much more descriptive and clearer than when proposals make statements such as “commercially important varieties will be tested”. Statements like this are not specific enough for proper review. Not stating these specific varieties/genotypes is akin to saying you plan to use replication without specifying the number of replicates. We understand space is limiting on a research application making it even more critical to get the treatment list up front and clearly specifying the materials used. Some applications write a lot of words in the methodology section without saying a lot. This is the time to get a napkin version of treatments, material used, experimental design and comparisons.

Words such as ‘at least’, ‘up to’, ‘possibly 5 treatments’, ‘may be compared’, ‘commercially important’, etc. lead the funding proposal reviewer to determine the researcher has not yet fully defined the experiment.

When a treatment list is not possible as is the case in some breeding trials, it is still important to define the experiment. In many cases where there is just a ‘yes’ or ‘no’ action, it is important to know how many samples this action will be judged in the first and subsequent years. Despite the fact it is hard to predict what lines will be advanced, it is difficult to understand the effort required to complete the project when there is no indication of the amount of material anticipated in year 1 through year 3-5. How was the budget determined if the researcher does not have a general idea of advancing material?

In addition to a treatment list and experimental design, a detailed list of soil and plant measurements must be included in the funding proposal. For example, the proposal should specifically state what data collection is planned. For typical agronomic field studies this may include: emergence counts at 21 days after planting, biomass from 2 – 1m2 locations per plot at soft dough, days to maturity as calculated according to Karamanos et al. (2008), spring soil nutrient analysis as per Western Ag Labs, soil texture, soil pH and organic matter. Field studies should also be supplemented with weather station data collected at the field site. If weather station data from the exact field site is not available, the distance to the nearest weather station should be referenced and all field trials should have an on-site rain gauge that is checked and recorded weekly. The research committee will appreciate reviewing a funding proposal that forms the outline for a trial protocol.

Producer supported research is important to the long-term health of the agriculture industry. Producer Commissions are responsible and accountable for the research they support to the farmers they represent. It is an important role for scientific experts on Producer Research Committees to lend their opinions on farmer-funded research and to ensure that they understand what they are paying for. A treatment list, an experimental design and detailed description of data collection would go a long way to ensure producers understand what they are paying for.

Note: Although this article has been written from the “Diaries of a Crop Commission Research Committee”, similar themes and principles can be applied to livestock-based research proposals.

George Clayton, PhD was a research scientist with Agriculture and Agri-Food Canada who sits on the Research Committees of Alberta Canola, Alberta Wheat and Barley Commissions and has reviewed proposals for SaskBarley.

Sheri Strydhorst, PhD, formerly with Alberta Agriculture and Forestry and the University of Alberta now works with Alberta Wheat and Barley Commissions. In her previous roles, she has reviewed proposals for Alberta Canola and Alberta Pulse Growers.

Brian Rossnagel, PhD, was a barley breeder at the University of Saskatchewan and has sat on many reviews of research programs, the Barley Cluster Advisory Committee and has reviewed many proposals for SaskBarley and others.