Just a little over a month into my position as a Director with ACPC has been quite the experience to say the least. I was recently able to attend the 49th CCC (Canola Council of Canada) Convention in San Diego held on March 1-3, 2016 and to say that my eyes were opened to really how global our industry is would be an understatement. As a producer that never saw, or paid attention for that fact, to what happened with our canola beyond the sale or before we picked up our seed, my eyes were opened wide; and I have barely scratched the surface.

The first thing that I began to understand was the depth and scope of what CCC really was. From top to bottom. The Board of Directors is made up of some pretty smart people that are involved in all parts of our industry. I didn’t realize that along with members of the regional producer groups that sit as directors, there were people from elevators, processors, and life science companies that comprise the group. Throughout the weeks activities I was able to meet the Chair of the Board Brian Conn, who is also Vice President of Canadian Oil Seeds with Louis Dreyfus, as well as get to know people like Brett Halstead, the President of Canadian Canola Growers Association a bit better. 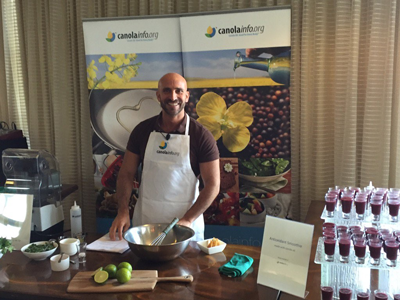 Another thing I learned was that the CCC staff consists a lot more than just the agronomists. It is always great when you can be in a room with someone that is as much agronomic knowledge as Angela Brackenreed and they are an invaluable part of the Western Canadian Canola Industry. But CCC goes so much deeper than that. As I wandered around fumbling trying to remember names and faces I had met, I would meet people in positions I didn’t even know existed.  The one that I found most fascinating was when Brian Innes introduced himself to me. I had no idea that CCC had someone employed in government relations that actually lived in Ottawa, working on behalf of canola. For some reason, my mind was blown by this. As producer, I’m not sure how I used to think we gained market access to many places or how problems with restricted markets were resolved, but I assure you, there are people working on issues all the time. Whether it be dealing with the Chinese government over MRL’s and dockage maximums or finding new markets for canola meal, these people work very hard to maximize the value of canola we produce.

The convention as a whole brought some of the biggest players in the canola industry together under one roof. I was able to meet and chat in length with Brad Orr of Dow AgroSciences one evening. While people like Brad have great responsibility in leading the companies they work for, they have all the time in the world to talk to producers. They want to know what we think. How and why we do things we do as producers and what they can do to help make us be more efficient and productive. I also had the opportunity to sit and have lunch with the Bayer team that is involved very heavily in the InVigor canola program. (Note that there were so many names and faces that I don’t dare put them down because I would screw at least two of them up). Once again, the questions and answers that went back and forth helped both parties understand what we are looking for in a producer – supplier relationship.

The time spent there was also great for me as a new director get to know the staff and other directors of ACPC better. Producers in this province should feel lucky that there is a group of people this brilliant that are willing to work for all of us in the industry. I am amazed at the wealth of knowledge and diversity this board brings to the table. Being able to spend time with them all in a bit of a more informal setting allowed for some pretty neat conversations. Some of them serious and some of them a little bit more fun. Being new in the position, it was fun when I was approached by someone that was trying to lobby their position to me on something and I would pull out my “I’m new to the Board Card” and direct them to a group of seasoned veterans.

We also have remember that there are two other canola producer groups in the West. I spent time trying to meet some of the staff and directors of SaskCanola and the Manitoba Canola Growers Association. They are very much like us in Alberta and are full of bright minds as well. Many of the struggles and triumphs we have in Alberta are the same in Saskatchewan & Manitoba. There were many ideas tossed back and forth as to how we can collaborate on issue and help each out. It is also where Rick Taillieu, our Grower Relations and Extension Coordinator received the nickname “Roberta of Alberta” 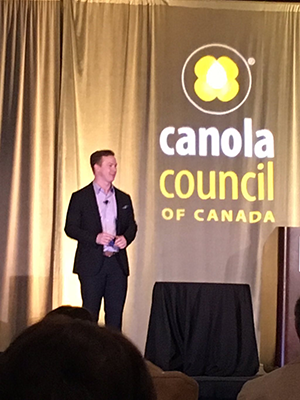 While most of what I have talked about has been networking, there were a few key speakers that I found very interesting and their information resonated with me. Curt Steinhorst kicked the meeting off with a great presentation on distraction. We live in an age where we are tethered to our phones, and we aren’t using them as phones either. He talked a lot about how we need to disconnect ourselves from the outside and spend time either on our work or with our families without wondering what messages, email, Twitter updates or Facebook posts we have missed. It would go a long way to making us far more productive. Having information at our finger tips isn’t always a good thing. Which is why it was great that the next speaker was Yvette D’Entremont aka “SciBabe”. She talked about the misinformation that is out there, at everyone’s fingertips and how it has caused a social backlash against farmers and what we do. I also found Andy Vance extremely interesting. He talked at length about California Dairy and how important Canadian canola meal was to that industry.

As my first official event representing ACPC, I can’t begin to express how exciting it was for myself. The level of learning and networking that took place over the event far exceeded my expectations. I have learned in our own farm business, that if you aren’t willing to always learn, you will slowly be left behind. And that is the way that I will approach my tenure on ACPC. That will allow me to better serve the people that I represent. I am looking forward to what knowledge I will gain in this upcoming year and can’t wait for the 50th CCC Convention being held next year in Winnipeg.