When I was invited to participate in a weekend called Canola Camp, I immediately envisioned sleeping in a tent in the middle of a farmer’s field in Saskatchewan while thwarting off mosquitos the size of robins in the name of promoting canola. It was very much the opposite and I have already asked to participate again next year.

Canola Camp is a 4 day educational tour put on by CanolaInfo.org, a campaign managed by the Canola Council of Canada. The mandate of the group is to get as much information out to the general public about the health benefits of canola oil, specifically aimed at countries that import our oil. 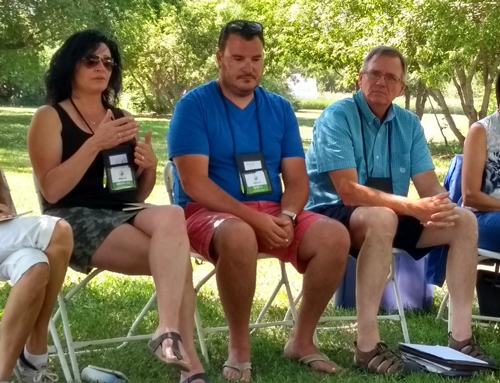 I found myself in Saskatoon (thankfully not in a tent) with two other farmers, CanolaInfo staff, and 15 participants from Canada, the US and Mexico. These ‘campers’ included doctors, dietitians, test kitchen leads, chefs, food bloggers and more. The majority of these participants had no idea where canola oil came from, how it is grown, or the process of turning seed into oil. These people all have influence on other people and the type of food they eat, and where they get their dietary information from, so the goal is to educate those who are influencing and educating others – even if it means 15 people at a time.

The toughest part about getting a group of total strangers together is getting everyone comfortable with one another so that meaningful conversation can be had. It didn’t take long for that to happen. We had a social icebreaker that involved square dancing in an old barn! I’m not going to lie, I cringed at the thought of this and thought it was ridiculous but you know what? By the time we were finished and on our way back to the hotel, everyone was chatting, had opened up to one another, and conversations had already started.

This event was also good for me as a producer, as I make assumptions about the level of knowledge that our urban consumers have regarding agriculture. We went to a local farm to show them all the different types of machinery that is involved in a modern operation and the investment required to stay efficient and profitable. The camper’s minds were totally blown, as most think of farming as a quaint Mom and Pop organization, not as agribusiness.

Everyone who attended took great interest in what we as farmers had to say. We spoke at great length about how genetic engineering has helped us be greater stewards of the land, and we outlined how practices have changed in the past 20 years allowing us to be more environmentally sustainable. When they actually saw how little chemical we use on our crop, they were completely amazed as the common misconception is that we use crop protection products in excess without realizing most of the volume is water.

Another significant discussion was the fact that we as farmers actually aren’t being held at ransom by the life science companies, forced to use their products. These companies give us tools to use in order to produce commodities in as safe, sustainable, and profitable fashion. My take home statement was: “I have 5 kids that I am raising. If I thought for one second that what I was doing was going to harm them in any way, I wouldn’t be doing it – my family eats the same food yours does.”  I think that that really hit home for them. 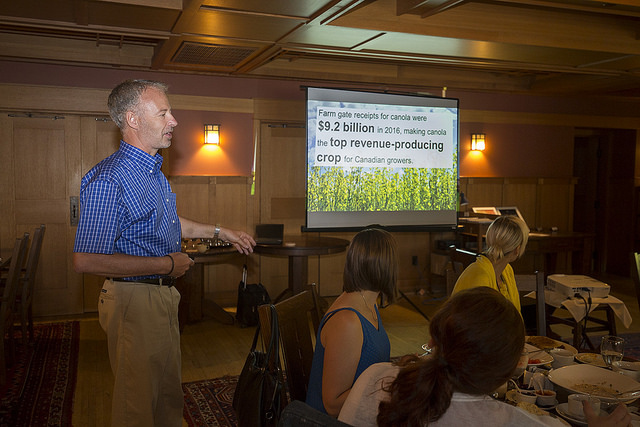 Bruce Jowett, with the Canola Council of Canada explained the importance of canola in Canada to the campers.

The CanolaInfo staff did a fantastic job when it came to showing the campers how canola seed was turned into the oil they cook with and eat. We taught them how seed was graded by doing as simple strip roll then we had a small press demonstration where the participants were actually able to see the seed turned into oil and meal. Having the ability to show people how a commodity is turned into a food ingredient that they can buy on the shelf is invaluable.

I even had the opportunity to do some learning. We did canola oil taste testing and even I was actually amazed at the difference in taste between all the different ways that canola was processed.

All in all it was a fantastic 3 days. The CanolaInfo Staff put hours upon hours of work into this event. It was the 20th year that they have run this event. If we do the math that’s 10 to 15 participants per year over 20 years which makes for quite a group of people they have reached.

The big take away from my time there is: most people are uneducated when it comes to where their food comes from, but the majority of them are interested and they want to learn. They want to hear from farmers and are open to the information we share. This only works if it is open, 2 way dialogue though – we can’t take the soap box approach. We need to listen to the consumer just as much as we need them to listen to us.

“Since my trip to Saskatoon, I’m an even bigger fan of canola oil. Why? Perhaps it’s because I’ve seen the canola plants in various stages of growth. I’ve walked through the beautiful fields with yellow flowers so incredibly bright.I’ve tasted those flowers (they have a hint of broccoli because they are part of the same family) and several types of canola oil. But mostly, I’ve learned that the growers put their hearts and souls into their fields to produce the greatest quality oil while carefully protecting the soil, water and air. How could I not be a fan of both the oil and the farmers?”
– Jill Weisenberger, MS, RDN, CDE, CHWC, FAND, is a Nutrition, Culinary & Diabetes Expert, Wellcoach®-certified health and wellness coach, Freelance Writer, Registered Dietitian Nutritionist and Certified Diabetes Educator.