Food trucks and BBQ. Games of Chance. Live music. Hundreds of farmers and agronomists, and only slightly fewer presenters. Hundreds of plot trials and demonstrations.

If this doesn’t sound like the ‘average’ canola plot tour … you’re right.

The brainchild of several late-night canola strategy sessions amongst agronomists and extension co-ordinators, CanolaPALOOZA was first conceived by the inestimable Dan Orchard as “the Social Event of the Season”, where producers and agronomists could attend an atypical plot tour (seeded as early as environmentally possible) that was more advanced than their own crops. The treatments would be timed to generated producer enthusiasm and knowledge, which could then be taken home and applied that day.

The name CanolaPALOOZA came to Rick Tallieu, while rototilling his garden (don’t get me started on the inconsistency of a Reduced Tillage Agronomist engaging in Maximum Tillage…).  He immediately asked us “Who wants to have a CanolaPALOOZA?” and we all agreed that it needed to happen. No schedule, no formal curriculum, just a wealth of knowledge scattered throughout hands-on displays and plots of canola and other treatments. Learn at your own pace! 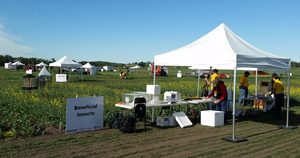 The site is setup for the gates to open!

We are celebrating the third CanolaPALOOZA in Alberta, the second in Manitoba, and the first in Saskatchewan (hence, 3-2-1…). Many of the Canola Council Agronomists attended and presented at all three (Saskatoon, Portage la Prairie, and Lacombe). While no two programs were identical, a number of treatments were common to all three. For example, Insect Pest demonstrations, including identification and sweeping schools were at all three. A heavy emphasis was put on the importance of adhering to economic thresholds, to preserve the insects being taught about right nearby… beneficial insects and natural enemies. Disease identification, weed management, crop and soil fertility, and a soil pit filled with expertise were also highlights. Arguably the most popular attraction at each PALOOZA was the sprayer cleanout and drift station, staffed by the gentlemen from Sprayers 101. Thankfully, Tom Wolf was able to resist looping the smash Don Ho hit “Tiny Bubbles” as a musical accompaniment to his droplets demonstration this year. 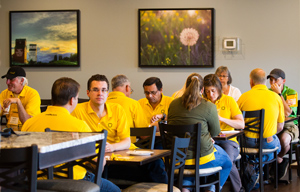 Instructor breakfast – a sea of yellow

The value of the CanolaPALOOZA lies largely in the attendee to presenter ratio … in the ballpark of 5:1. That’s more instructors per student than a kindergarten. The presenters are among Canada’s leading experts in their respective fields at each station, and also include the new generation of scientists and researchers. The heavy presence of grad students and junior scientists allows for a passing of the torch from more experienced presenters to less, ensuring a smooth flow of research, knowledge, and extension well into the future.

This event is unique, from an Agronomist’s perspective as well… for the same reasons. At an event as well attended by Farmers and Agronomists, we get the opportunity to have personal contact with many of them to answer their questions and hopefully show them something new. Ideally, something new they can go home and apply to their operation that day. As well, the lack of a structured agenda means that we can cater to and address a producer’s specific concerns or questions. This gives us the opportunity to better understand what’s happening in field, and on farm.

For specifics regarding lessons that could be gleaned from the CanolaPALOOZA, head over to Canola Watch (and sign up for the newsletter, if you’re not already…) and give this a read:    http://www.canolawatch.org/2017/06/28/top-10-canolapalooza-2017-highlights/

Thanks to Gregory for sharing his photos for this post 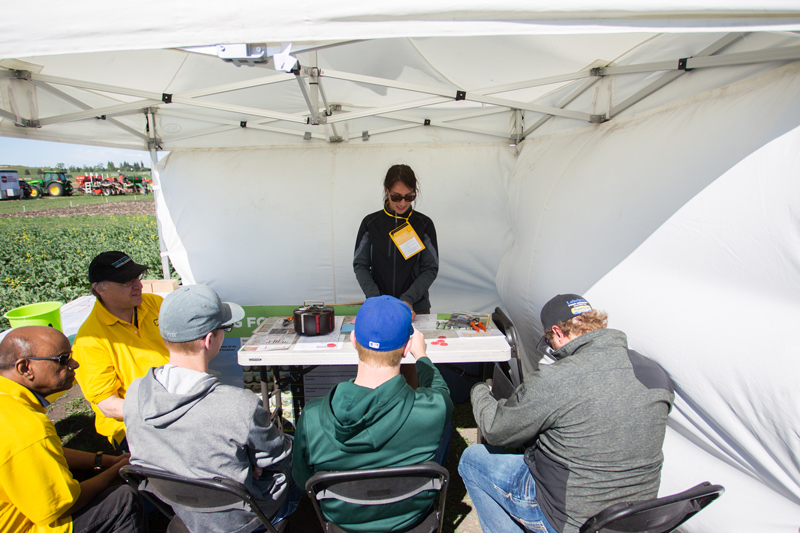 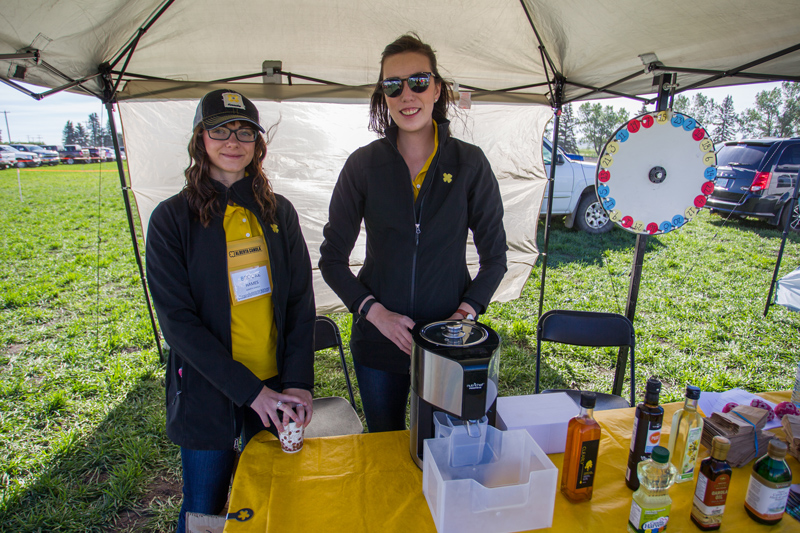 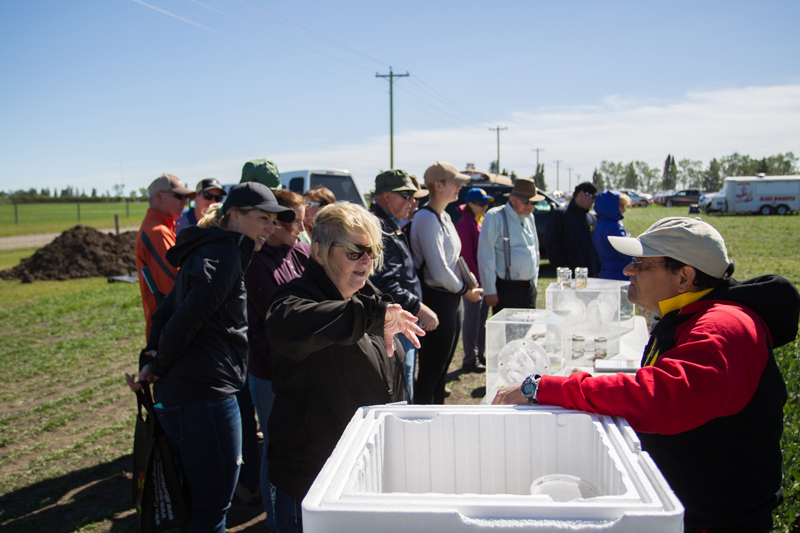 Hector Carcamo, from AAFC-Lethbridge was one of the instructors at the extremely popular beneficial insect learning station. 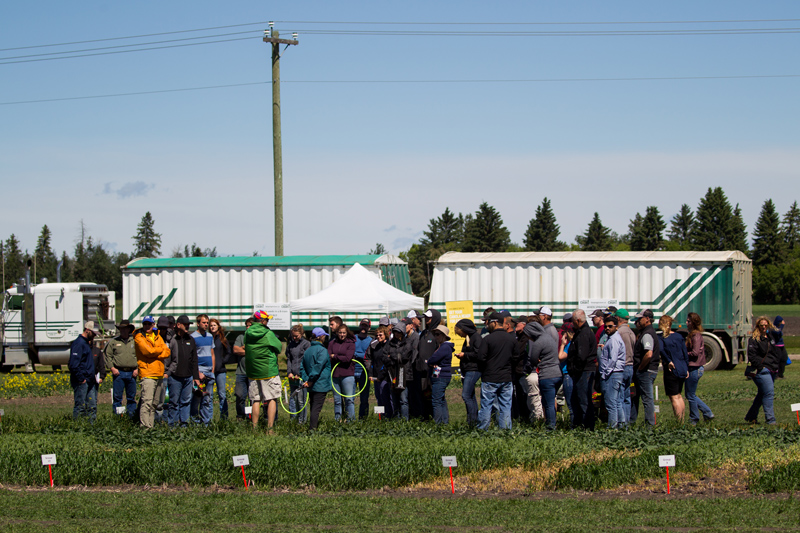 The powerhouse lineup of Neil Harker, Linda Hall, and Eric Johnson at the herbicide grid attracted a crowd all day. 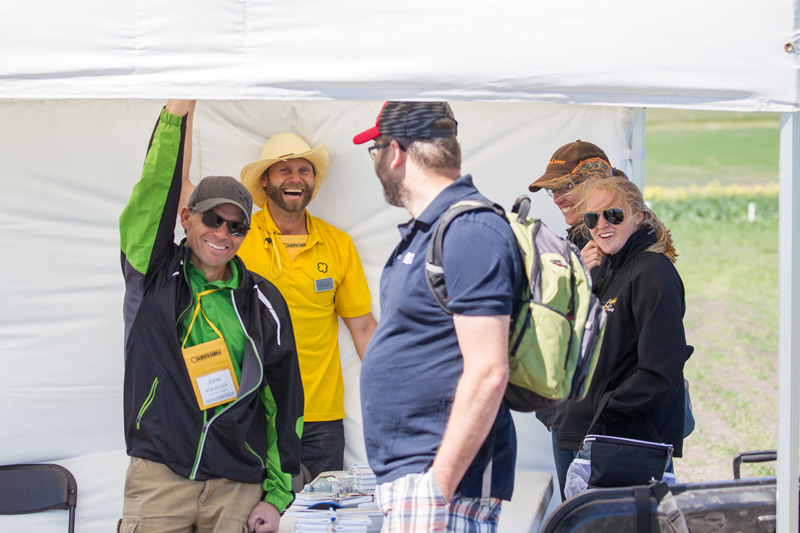 John Kowalchuck and Nevin Rosaasen from the Alberta Pulse Growers appeared to have really enjoyed canolaPALOOZA.