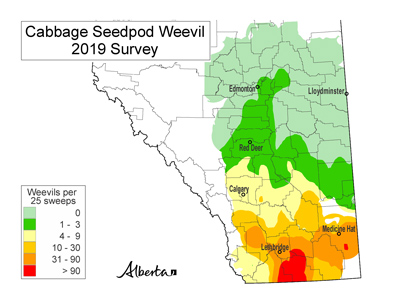 The 2019 survey covered all the canola growing areas of Alberta (except the Peace region) with 232 fields sampled in 50 municipalities and 41 reports from our online reporting tool. The cabbage seedpod weevil was once again found at economic levels in southern Alberta, however many fields were below threshold levels and on average the numbers were lower than normal. This is the third consecutive year that cabbage seedpod weevil numbers have been lower than normal but this insect still requires close monitoring for all producers in southern Alberta, especially in its traditional range south of Highway 1. 2019 saw a return to the northern range extensions of 2016, with individual weevils found in Wetaskiwin, Strathcona and Lamont. Despite lower numbers in 2019 it will still be important to scout canola in early flower to make control decisions in southern Alberta.  We have seen economic threshold levels as far north as a line between Red Deer and Consort Alberta in the past and those areas should monitor very early flowering canola. Jennifer Otani, Agriculture and Agri-Food Canada conducts the canola survey in the Peace River region where no cabbage seedpod weevils have been found to this point.

Cabbage seedpod weevil was first found infesting canola in southern Alberta in 1995, since then, the weevil has spread to south-central Alberta and southwestern Saskatchewan. The distribution and abundance of the cabbage seedpod weevil have been monitored yearly in western Canada since 1997. Predictive models based on climate data indicate that this pest will eventually disperse to all regions of canola production in western Canada, including the Peace River region.

While this is not a true forecast, the numbers of weevils found through this survey in southern Alberta and the southern counties of central Alberta counties indicate a potential of economically damaging populations in the next growing season. Any producers that grow canola in southern Alberta and into the south portion of central Alberta will have to check their canola crops as they come into flower. The earliest flowering canola crops tend to have the highest risk from cabbage seedpod weevil and should be monitored very closely.

Cabbage seedpod weevil overwinters as an adult so the risk of infestation is further indicated by the adult population of the preceding fall. High numbers of weevil adults in fall will likely mean significant infestation levels in the following spring. This map does not adjust for the emergence of the new generation in the fall or overwintering conditions, although cooler temperatures and rainfall in August favors the development of the new generation of weevils and may lead to higher numbers in the following year. Very cold winters do have the potential to reduce overwinter survival of cabbage seedpod weevil adults.

The cabbage seedpod weevil takes roughly eight weeks to develop from egg to adult. Development time will vary somewhat depending on weather conditions, especially temperature. There is one generation per year. Follow this link for further information about the life cycle.

Crop damage from cabbage seedpod weevil can occur from: 1) bud-blasting (potentially reducing yield in dry years though not experienced in Alberta), 2) larval feeding within developing pods (larva consumes five to eight seeds, this is the major source of losses), 3) premature shattering of damaged pods and 4) new generation adults that emerge in the fall feeding on nearly developed seeds (usually concentrated only on very late crops)

The larval feeding alone can result in yield losses of 15 to 20 per cent in each pod infested.

Cabbage seedpod weevil adult abundance is best monitored by using sweep net samples. Sampling should begin when the crop first enters the bud stage and continue through the flowering period. Select ten locations within each field, and at each location count the number of weevils from ten 180 degree sweeps. Sampling locations should include both the perimeter and interior of the field to obtain a representative estimate of weevil numbers throughout the field. Here is a link to the sampling video.

This monitoring procedure will also give an indication of the number of lygus bugs and diamondback moth larvae present and may serve as an early warning for those insects, provided that the same fields are monitored into the early pod stage.

Thank you all for your contribution.

Thank you David Giffen, Agriculture and Agri-Food Canada, Saskatoon for preparing the map.

For more information on this insect and its management contact the Ag-Info Centre at 310-FARM (3276) or [email protected].