After running canoLABs for six years at four different locations across Alberta, attracting over 1,100 farmers and agronomists over those years, it was time for a change. This year, we – the Canola Council of Canada, Alberta Canola and the University of Alberta Botanic Garden – wanted to increase focus and dive deeper into the hands-on experience and knowledge transfer regarding the crop that contributes $26.7 billion to the Canadian economy. These attributes were only attainable by increasing intimacy and compressing size.

The newly-formatted canoLAB took flight this winter over the course of three months, with 16 Top Gun Agronomists from across Alberta. Although the event required serious time commitments from participants, this extensive training allowed agronomists to better develop and understand the science behind the major agronomic issues affecting canola. Mornings were typically focused in the classroom, with afternoons spent in the greenhouse. Desired trials were chosen by agronomists, which involved competitions amongst each other to prescribe different soil amendments and ‘fix’ problem soils.

Topics covered at canoLAB Top Gun included, but were not limited to:

Clubroot. A soil amendment specialist from Manitoba, Trevor Thornton, along with Brad Anderson, Alex Nguyen and Mike Tate from Graymont, discussed the science and technical side of liming, and the products available to adjust soil pH. Top Gun participants then limed clubroot-infested soils with hydrated lime, zero grind calcium carbonate and super cal. Victor Manolii, Stephen Strelkov and Nicole Fox from the University of Alberta (U of A) helped us analyze the trials, explaining how to rate clubroot galls and the use of the clubroot differential set. Dan Orchard with the Canola Council of Canada (CCC) put together many great clubroot demos with a few infected soil samples gathered from fields West, South and North of Edmonton. 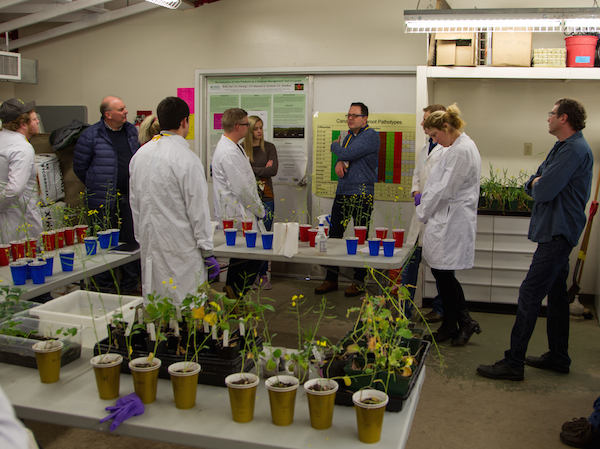 Stephen Strelkov from the University of Alberta teaches Top Gun Agronomists about clubroot.

Insects. John Gavloski from Manitoba Agriculture spoke on canola pests, both ecology and management. Gregory Sekulic from the CCC and Sherrie Benson from the U of A spoke all three days on various beneficial insects including the minute pirate bug and lacewing. We were even able to see aphids mummified by Aphidius colemani – a parasitic wasp. 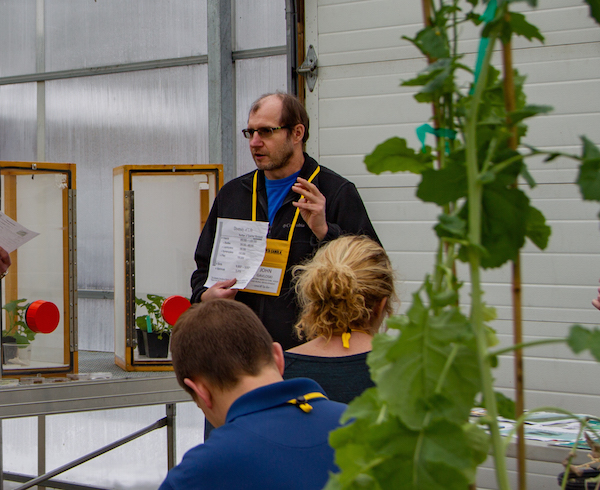 Manitoba provincial entomologist John Gavloski teaches Top Gun Agronomists about beneficials and the diversity of insect life in a field.

Manitoba provincial entomologist John Gavloski teaches Top Gun Agronomists about beneficials and the diversity of insect life in a field.

Nutrients and fertilizer. Ray Dowbenko from Nutrien put in a few hours with the group, analyzing some great visual demos Keith Gabert with the CCC had planted. Differing soil types allowed them to explored seed safety, deficiencies/toxicities, and a ‘mystery swath’ diagnostic challenge. Keith provided a canola swath from the 2017 growing season with missing pods. The challenge for Top Gun Agronomists was to review physical issues, plant tissue tests and soil samples. They then had to create a prescription to grow canola in and ‘fix the issue’. Gregory Sekulic worked with terrariums to help visualize root movement with different openers and fertilizer placement.

Genetics. Habibur Rahman with the U of A talked to us not only on the canola breeding program he leads at the university, but also the complex and interesting process involved in developing canola germplasm from a wide range of canola relatives for future industry needs. A few agronomists took part in hand pollinating canola plants and determining who was the better pollinator with the number of pods that were produced.

Reduced Tillage. Rob Dunn from FarmWise Inc. in Lethbridge reminded us why we need to encourage reduced and zero till practices on our operations. Murray Hartman, provincial oilseed specialist with Alberta Agriculture, was able to take in the third day with us at Top Gun and share his experience and knowledge.

Our goal with the new format of canoLAB Top Gun was to target agronomists who wanted to increase their canola agronomic practices but also, most importantly, to teach others around them. It was a “train the trainer” type of model. Therefore the option of sharing their newfound knowledge onto their coworkers was possible in a ‘Part B’ component – a separate day of learning where the participating agronomist becomes the trainer. Although we have reduced the number of participants from our previous canoLABs, we are hoping the potential reach is greater due to engagement intensity, passion, and the desire to educate others about agriculture. 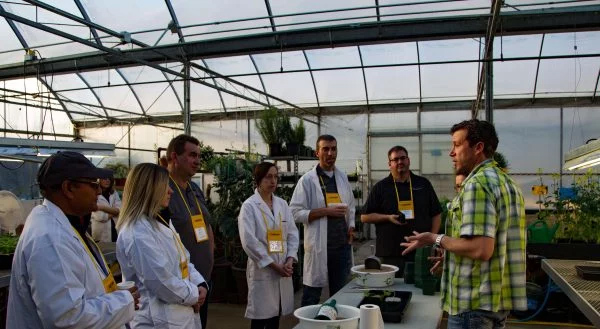 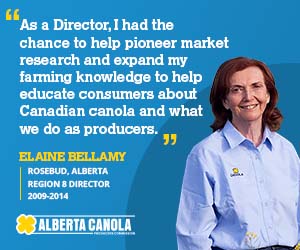