The Canola Council of Canada (CCC) held their November board meeting in Edmonton, but what was special about this event is that CCC invited Alberta Canola Producers Commission (ACPC) to join them in a political outreach to Alberta’s new government. The CCC is a full value-chain association representing all aspects of the canola industry across Canada, including canola growers, crop input retailers, grain hauling companies, processors including canola crushers, and exporters. On a mild and sunny November 4th two teams comprised of CCC and ACPC board members and staff were able to meet with a number of the Members of the Legislative Assembly of Alberta (MLAs) down at the Legislature Building and the beautifully redesigned Federal Building. (As an Albertan, I was proud of the investment in infrastructure that our province has made to our heritage buildings that can showcase Alberta on the world stage.) 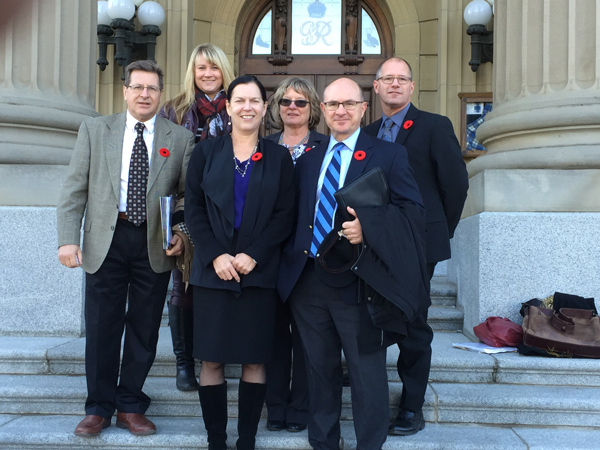 The teams met with both government and opposition MLAs, including three Ministers. Awareness of canola and agriculture in general ranged from limited exposure to being well versed on many issues. The outreach had four main objectives: to highlight the importance of the canola industry and international trade, maintain funding of agricultural research and science-based research, and promote the sustainability of canola.

One key takeaway was there is tremendous value in our elected farmer directors bringing personal experiences from their farms into the political discussions. Marlene Caskey, director of Region 12 who farms near Oyen, spoke of canola’s impact on her farm saying, “25 years ago we started growing canola because we needed a broadleaf crop to rotate between cereals to break disease, but because of the investment in innovation along the entire value-chain it is our most profitable crop…it’s the crop that pays the bills on our farm.” 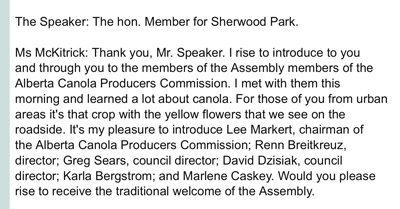 Excerpt from the Alberta Hansard on November 4, 2015.

Reaching out to government landed us an invitation to attend Question Period (QP) as honoured guests by Ms. Annie McKitrick, MLA for Sherwood Park, where we received the traditional warm welcome of the Assembly. I try to sit in on the federal QP in Ottawa whenever I get the chance because I think it’s exciting to experience democracy in action…as well as entertaining if there’s a hot issue. I admit it’s been years (Grade 9 field trip) since I sat in our province’s QP, but after the warm welcome my next visit won’t be so long in between.