Bring your perspective to the table and make a difference. Nominations are now open for growers to serve as director on the Board of the Alberta Canola Producers Commission to represent regions 1,4,7, and 10.

Visit albertacanola.com/regions for a list of municipalities in each region.

Alberta Canola directors work alongside fellow farmers to represent growers in their region and collaborate with decision makers from across the agricultural spectrum to drive the industry forward.

The Board of Directors meets quarterly and is guided in decision making by five committees:

Who Can Become a Director? 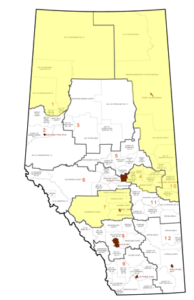 An eligible producer is defined as any producer who has grown canola in Alberta or is entitled to a share of canola grown in Alberta under a crop share arrangement, and who has paid or submitted a service charge (levy) to the commission on canola sold within the past August 1, 2020 on canola grown in regions 1, 4, 7, or 10 is an eligible producer and can let their name stand as a director in 2022.

Eligible producers can be individuals or represent a corporation, partnership, or organization. In order to be nominated, eligible producers must grow canola within the defined region but do not have to reside within it.

Get complete details and nomination forms at albertacanola.com/nominations