This chart outlines how the canola value chain works together to help build a stronger canola industry. 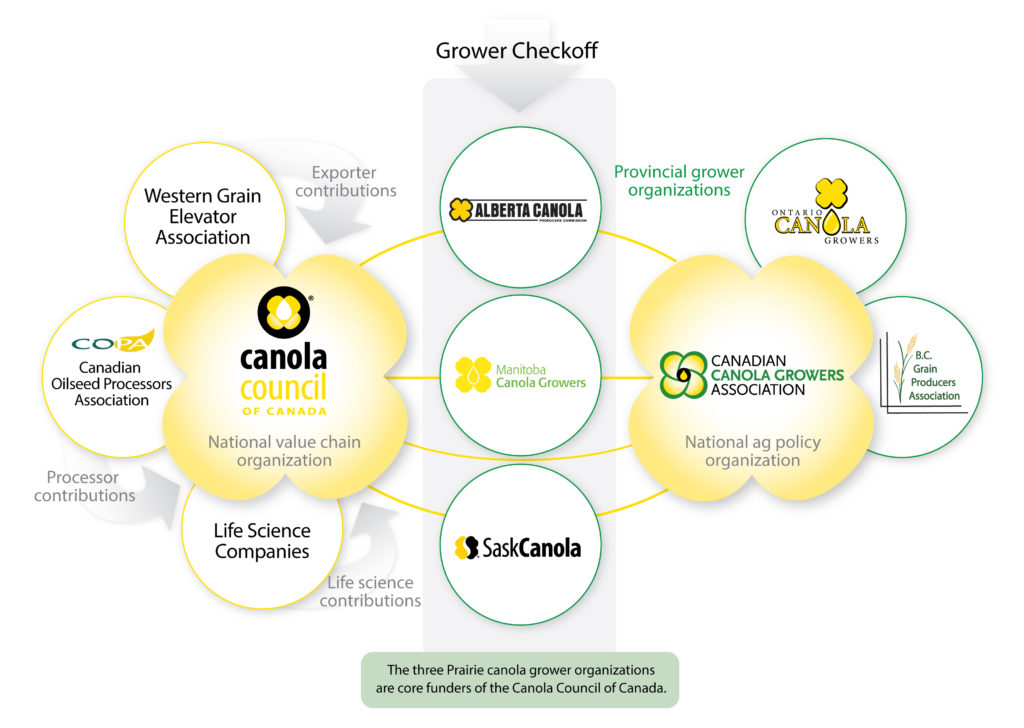 CANOLA COUNCIL OF CANADA (CCC) is a national non-profit industry association representing the entire canola value chain — growers, seed developers, processors and exporters of canola and its products. The Canola Council of Canada’s mission is to advance the growth and profitability of the canola industry based on innovation, sustainability, resilience and the creation of superior value for a healthier world.

The Canola Council of Canada is focused on crop production and innovation, trade and market access. It is governed by a 17-person Board of Directors representing all sectors of the canola industry. The board consists of three processors, three exporters, three growers (from Alberta Canola, Sask Canola and the Manitoba Canola Growers Association), five directors at large (appointed by the Board) and three directors (appointed by the regular members).  Core funding comes from a voluntary industry levy paid directly to the Council by three provincial grower associations, processors, exporters as well as life science company contributions. The Canola Council of Canada also offers regular membership with voting rights for $500 per year and affiliate membership with no voting rights for $250 per year.
canolacouncil.org

CANADIAN CANOLA GROWERS ASSOCIATION (CCGA) is the national policy voice for canola farmers in Canada. As a national, non-profit, grower organization, CCGA strives to influence national and international issues, policies and programs to enhance profitability of Canadian canola growers. In addition to its advocacy and agriculture policy development role, CCGA also administers the national Advance Payments Program (otherwise known as the cash advance program) for 25 crops and certain livestock across western Canada. CCGA is governed by a 10-member Board of Directors appointed by the provincial grower organizations. CCGA is represented on the CCC Board of Directors.
ccga.ca

ALBERTA CANOLA PRODUCERS COMMISSION  represents all canola producers in Alberta. Alberta Canola’s mission is to support the long-term success of canola farmers in Alberta through research, extension, consumer engagement, and advocacy for canola farmers. Alberta Canola focuses on research, grower education and extension, market development and policy. It is governed by a grower elected Board of Directors representing 12 regions within Alberta. Alberta Canola generates its operating funds through a canola grower check-off. It is a core funder of the CCC and a member of the CCGA.
albertacanola.com

SASKCANOLA (SASKATCHEWAN CANOLA DEVELOPMENT COMMISSION) is a producer led organization, with a mission to optimize canola producers’ competitiveness and profitability through a producer controlled fund which directs research, market development, extension and policy development. It is supported and funded by registered producers through their check-off contributions. SaskCanola uses these contributions to further explore and secure canola markets for producers nationally and internationally; continue agronomic success, by working on important research that benefits producer profitability; and acquire the latest crop and farm business information through communications programs and services. The Board of Directors is composed of eight registered canola producers elected by registered canola producers for a four-year term. SaskCanola generates its operating funds through a canola grower check-off. It is a core funder of the CCC and a member of the CCGA.
saskcanola.com

MANITOBA CANOLA GROWERS ASSOCIATION (MCGA) is a member organization committed to maximizing net income for canola farmers through sustainable production. It will do this through leadership, learning and contributing to the industry by producing healthy safe products, providing imagination and innovation for future generations of canola growers; collaborating with our partners to provide positive outcomes to marketing, market development, research, education and awareness; and managing the land and environment in order to enhance it for future generations. MCGA is governed by an eight-member Board of Directors representing canola producers throughout the province of Manitoba. MCGA generates its operating funds through a canola grower check-off. It is a core funder of the CCC and a member of the CCGA.
canolagrowers.com

B.C. GRAIN PRODUCERS ASSOCIATION encourages all farmers to participate within their industry so that their voices may be heard. Its mission is to work to improve the viability of the grains and oilseed industry in the B.C. Peace River region. The association and its members maintain sustained liaison with other agencies to benefit the field crop industry. It is governed by eight-member Board of Directors, four from the South Peace and four from the North Peace. It is funded by the Peace River Agriculture Development Fund, Investment Agriculture Foundation and the B.C. Peace River Grain Industry Council. BCGP is a member of the CCGA.
bcgrain.com

ONTARIO CANOLA GROWERS ASSOCIATION represents 800 growers having marketed canola in last four years. Its mission is to provide support to the provincial canola industry through involvement in research activities, effective communication of canola production information, producer education programs, acting as the grower’s voice to governments and industry, and encouraging future market opportunities suitable to Ontario canola production. It is governed by a Board of Directors representing four Ontario canola growing districts. It is funded through a canola grower check-off. OCGA is a member of the CCC and a member of the CCGA.
ontariocanolagrowers.ca

CANADIAN GRAIN AND OILSEED EXPORTERS ASSOCIATION represents the export side of the industry. It nominates three representatives from the export industry to the CCC Board of Directors.